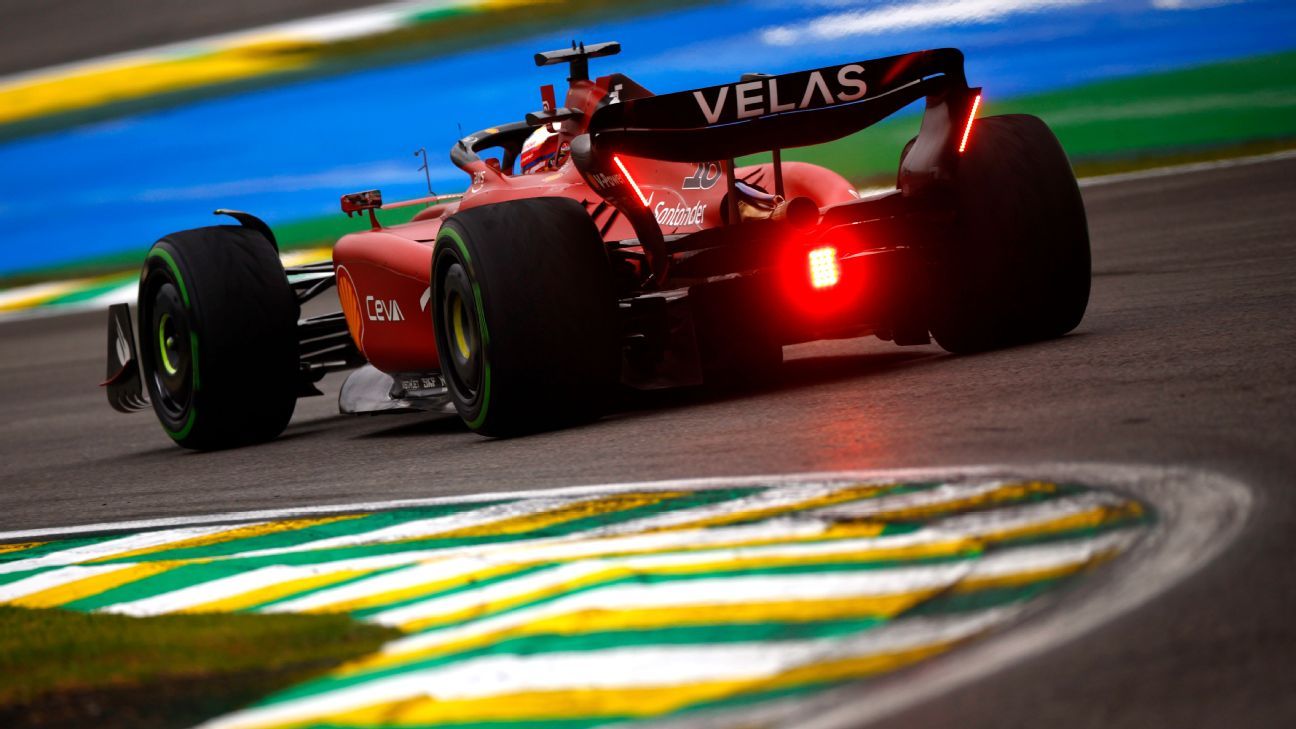 In the heat of the moment, Charles Leclerc labelled Ferrari’s decision to send him out on the wrong tyres in qualifying for the Brazilian Grand Prix as “f—ing unbelievable,” but later revealed he had accepted the tyre choice before heading out on track in Q3.

Using intermediate tyres when the rest of the top ten were on slicks proved costly for Leclerc and left him tenth on the grid for Saturday’s sprint race.

The track was only dry enough for slick tyres at the start of Q3 and by the time Ferrari recognised its error and ordered Leclerc back into the pits, he had already started a flying lap on the intermediate tyres, which he ultimately aborted.

A clearly frustrated Leclerc held back in his post-race interviews, but had let his feelings known over team radio when he returned to the pits after George Russell caused a red flag by spinning into the gravel.

“Did everyone complete a lap on slicks?” Leclerc asked his engineer over the team radio.

Asked what went wrong after the session, Leclerc said: “We were expecting some rain that never came. I will speak with the team and try to understand what we can do better in those conditions. It’s really disappointing, the pace was there.”

Ferrari’s sporting director Laurent Mekies said the team was gambling on rain with Leclerc, but chose to split the strategies so that teammate Carlos Sainz went out on slick tyres.

“It’s the sort of qualifying where you have to make a lot of calls, some of the ones we made today worked, some worked less well,” he said. “It was a bit frustrating because we got both cars into Q3 and then we were confronted with a lot of choices: on one side you have the track still being dry — and there is a golden rule that says you should go for the tyres to suit the track if it is dry — but on the other hand we were expecting heavy rain immediately.

“At the end of the day, we have split our cars because you always know at that very moment that depending on the exact timing of the rain there is going to be one happy man and one not so happy man. And that is exactly what happened because the rain came a minute too late for Charles.”

Leclerc was second in the queue leaving the pits in Q3 and only behind the Haas of Kevin Magnussen, who took a shock pole position by setting a time on slick tyres before the rain hit.

In order to be towards the front of the queue, Ferrari had to make a decision relatively early to give Leclerc enough time to drive down the pit lane, which meant the team had not seen which tyres its rivals had chosen before sending him out.

With rain forecast, Ferrari opted for intermediates and took second in the queue, but ultimately lost out.

“I accepted the decision to go on inters and then I was just waiting for the rain that never came,” Leclerc said.

MINI Created An EV Charger In The Shape Of A Giant RC Car Controller
How Did This Mass Driver Impale His VW On A Walmart Parking Lot Pole?
Nissan primes the EV pump
Tesla shares rise on Citi upgrade, Elon Musk talk of a new factory in Asia
GM Vows To Avoid “Opportunistic” EV Prices, Plays The Long Game