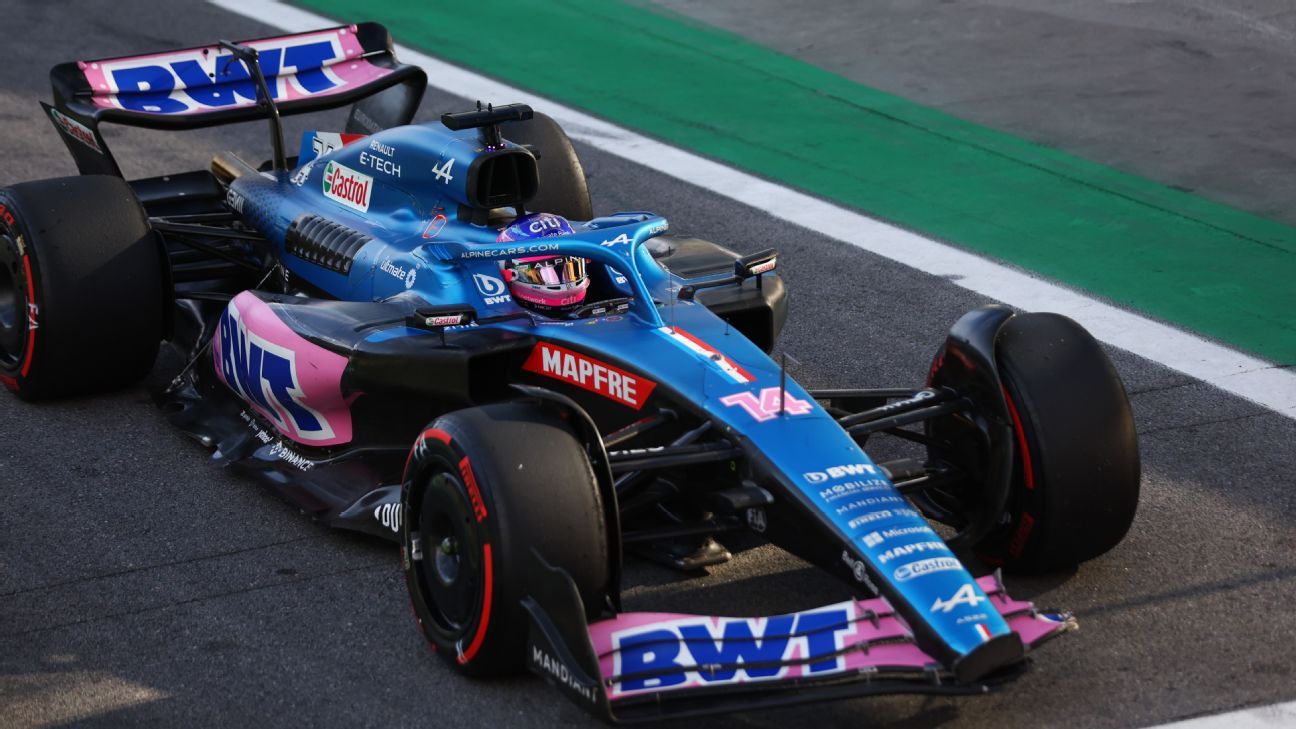 Alpine teammates Fernando Alonso and Esteban Ocon blamed each other for the collisions which will see them start at the rear end of the grid for Sunday’s Brazilian Grand Prix.

Alonso, who is leaving Alpine for Aston Martin next year, twice made contact with his teammate on the opening lap of Saturday’s sprint race.

Both cars were damaged and tumbled down the order, meaning Alonso will start 15th and Ocon will start 18th in a car which had looked competitive enough for a strong finish in the points.

After the collisions, Alonso told Alpine over the radio: “I lost the front wing thanks to our friend.”

In another broadcasted message, Alonso said: “He pushed me off at Turn 4 and then on the straight. Well done.”

The pair have visited the stewards over the incident to see if either would receive a penalty for what happened, with a decision pending.

When asked after the sprint race if he needs to talk to Ocon to smooth things over, Alonso said: “No, not really. I don’t need. It’s one more race then it’s over, finally!”

The two-time world champion then took a further dig at his French teammate, referencing not only several compromising incidents between them this year but also Ocon’s collisions with then-Force India teammate Sergio Perez and his collision with Max Verstappen at the 2018 Brazilian Grand Prix.

“It happened to him with Perez, with Verstappen, unlapping himself so… It’s one more race.”

Ocon’s view of the incident was that Alonso had been at fault.

“It is unfortunate what happened on lap one, I was trying to attack the McLaren, took my line into Turn 4 and Fernando came out of nowhere from the outside. So we touched. From there my race was pretty much over.”

When told Alonso was not too calm about the incident on the radio, Ocon laughed and replied: “Well, I’m quite calm. If he isn’t, he will be!”

Making matters worse for Alpine was that Ocon’s fire caught fire after he had parked it up after the race.

“The sidepod is completely open,” the French driver added. “I don’t know how it didn’t fly off. And the car was on fire as well, so I hope at the end there was not more damage.

“I left the car, I did a couple of steps, I went up to the scale and then I saw a car on fire. I thought it was the Williams, but no, it was mine…the whole bodywork is damaged, that’s for sure. I don’t know what the consequences are going to be.”

Your next Domino’s delivery may arrive in a GM Chevy Bolt as pizza chain pushes EVs nationally
Hyundai is on a hot streak in the U.S., but Biden’s Inflation Reduction Act could spoil it
Amazon backed out of taking a stake in Argo. Then the self-driving startup folded
Kia America COO: Inflation Reduction Act disrupts EV market
Domino’s launches fleet of Chevy Bolt EVs for pizza delivery