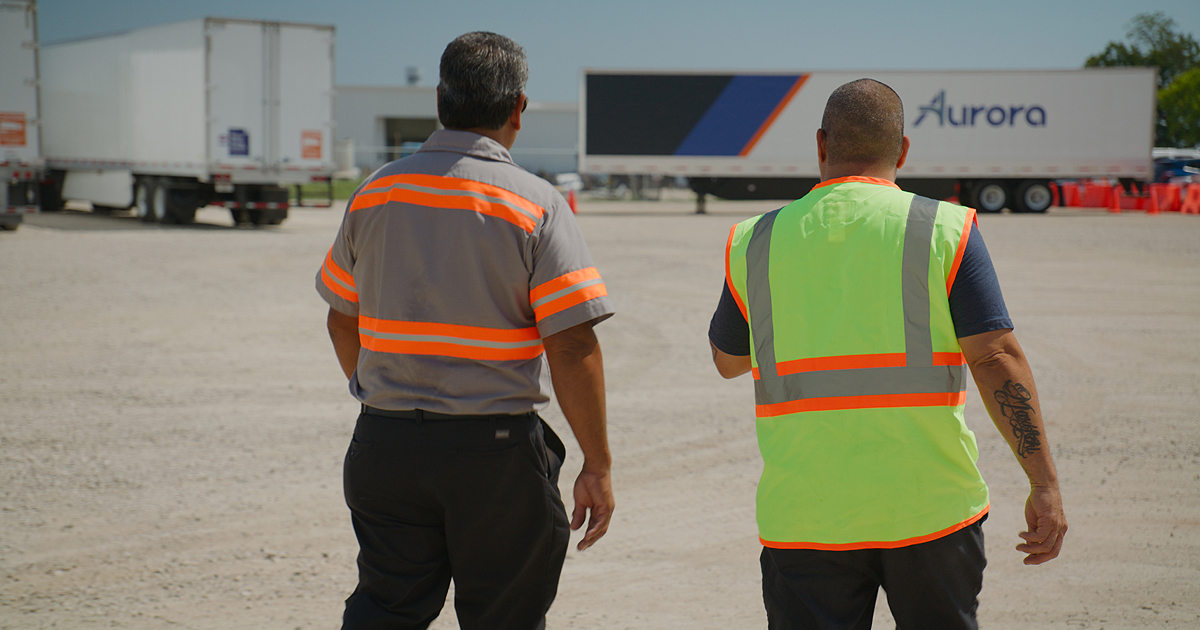 DALLAS — As traffic trundled by on nearby Interstate 45, Kendra Phillips stood on a gravel parking lot and sketched a practical piece of the autonomous trucking future.

Over here, the gates through which Aurora Innovation Inc.’s self-driving trucks might arrive after completing trips to Houston. Over there, scales for weighing trucks before they depart.

“We’re putting everything exactly where we want it, and we’re going to make sure this design we think works will really work,” said Phillips, Aurora’s vice president of service delivery.

She’s laying out the blueprint for the company’s 4-acre truck yard in Palmer, Texas, a south Dallas suburb, preparing it for an upcoming test involving many of Aurora’s 30-plus trucks in the state, ensuring the company is ready for everyday operations.

Rather than haul freight directly from warehouse to warehouse, Aurora believes a first wave of autonomous trucks will primarily ply interstates and stop at designated truck ports or terminals, where human drivers can take over and drive goods on local roads.

Along those lines, Aurora is collaborating with Ryder System Inc. to keep trucks ready for the road. Ryder technicians will work at Aurora’s terminal to fix the company’s Class 8 trucks and perform preventative maintenance and inspections, the companies said Monday.

For now, it’s a pilot project.

Both companies anticipate it will grow to support operations at future terminals and at widespread scale. Aurora expects its self-driving technology to be “feature complete” by the end of the first quarter in 2023 and to start driverless commercial operations by the middle of 2024.

Already, Aurora works with the likes of FedEx, Uber Freight, Schneider, Werner and Xpress. The company hauls freight 22 times a week for these customers, often between Dallas and Houston, and said that number is expected to increase to 100 per week by the end of next year.

Ryder has previously partnered with two other self-driving truck companies, Gatik and Embark, on identifying locations that can serve as transfer hubs and maintenance spots.

Self-driving technology has hit roadblocks in some respects, with the closure of Ford-and-Volkswagen-backed Argo AI serving as the most acute example. Several of the AV trucking companies have seen their stock prices dwindle; indeed, Aurora traded at $1.84 at the close of business Monday, a penny above its 52-week low.

But the increased attention on nontechnical business matters signals confidence in self-driving trucking’s overall prospects, according to Richard Bishop, principal at Bishop Consulting.

“The trucking industry has matured to the point where the leading fleets have done enough trials and testing, and they’re going to be ready to deploy when OEM-produced trucks are ready, which is not that far away,” he said. “They’re now looking for these other pieces to fall into place to bring it to reality.”

That reality can include everyday problems such as missing mud flaps and other minor maintenance concerns. Aurora has gotten a sense of just how often those issues arise while working with partners across its pilot projects, Phillips said.

With higher user rates expected, Ryder’s ability to provide frequent preventative maintenance and have mechanics standing by to fix more substantial problems will improve safety and help keep the fleet on the road.

Aurora is working on sharing pre-trip inspection and weight information with federal and state authorities, suggesting that someday autonomous trucks might be able to skip weigh stations while en route.

While neither Theodosiou-Pisanelli nor Phillips provided exact expected figures on the utilization rates of Aurora’s trucks, both said much of the overall effort, from pre-trip inspections to a hub-to-hub business model, is done with maximizing usage in mind.

That goes right down to where the gates are located as trucks enter and exit the yard.

“This is where we are and how we bring this to life,” Phillips said.