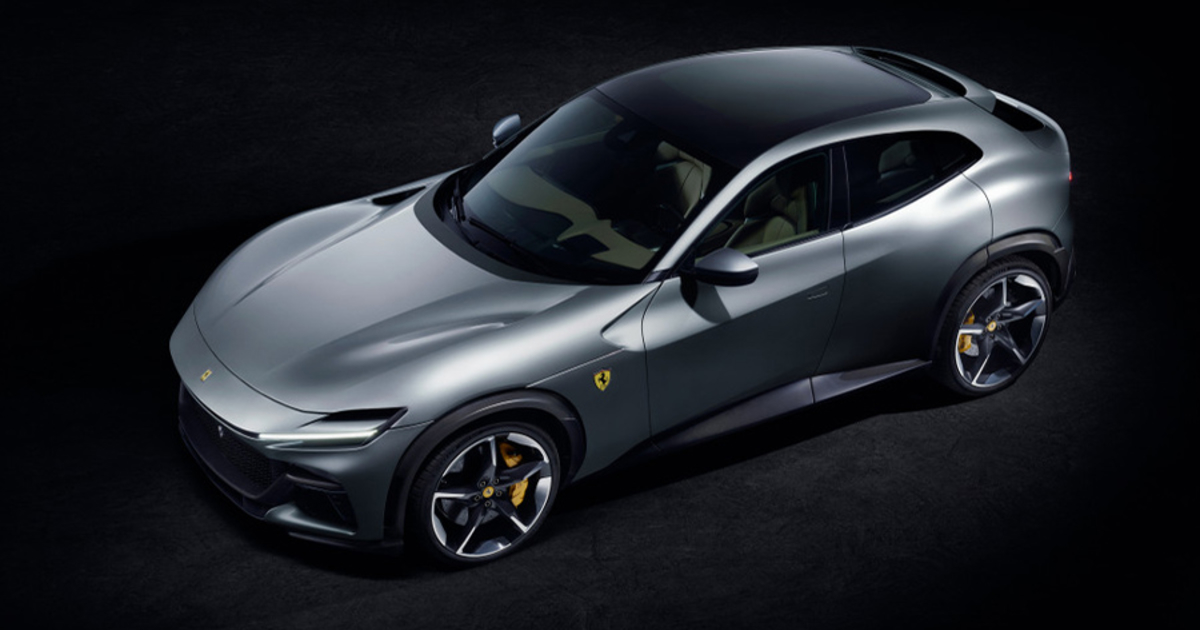 MARANELLO, Italy — Ferrari is refusing to call its first four-door vehicle, the Purosangue, an SUV or a crossover, despite its higher stance and all-wheel drive.

Instead, CEO Benedetto Vigna says, “The Purosangue is a sports car, something unique and distinctive, which is uncompromised on design and engineering.”

At starting price of 390,000 euros ($391,000) in Italy, the V-12 Purosangue will be the second-most expensive normal production Ferrari, below the SF90 range, which starts at 440,000 euros. (Limited production models cost more than 1 million euros, with the latest Daytona SP3 at 2 million euros.)

Ferrari plans to begin Purosangue deliveries in the second quarter of 2023 in Europe, in the third quarter in the U.S. and by year’s end in other markets.

To protect the exclusivity of the brand as well as sales of its core range of coupes, roadsters and convertibles, Ferrari will cap Purosangue output at no more than 20 percent of annual production. Ferrari’s installed capacity is about 15,000 units, making a potential annual output of about 3,000 units.

Pre-orders have been so strong that Ferrari could soon consider closing the order book, Enrico Galliera, the automaker’s chief commercial and marketing officer, said at a media event in Maranello with Vigna and other executives on Sept. 8. Orders officially open Tuesday after the car’s public launch.

Ferrari has been considering a four-door, four-seat model for more than 40 years, but never found a valid product proposition until four years ago.

In 1980, Ferrari decided not to produce a four-door sedan derived from the Pinin concept designed by Pininfarina that year. The weight of two additional doors and the longer wheelbase did not permit the performance level expected of a Ferrari, Galliera said.

In early 2016, asked if the Italian supercar company would expand its output by introducing an SUV, then-CEO Sergio Marchionne said “You have to shoot me first.”

Nevertheless, in early 2018 Ferrari realized that its experience on torque vectoring and an in-house designed active suspension system could permit it to deliver supercar performance with a four-door vehicle.

The car has a carbon-fiber roof as standard to lower the center of gravity and to keep dry weight slightly above 2,000 kg (4,410 pounds). Designing a bodyshell from scratch also permitted Ferrari to incorporate rear-hinged back doors to make ingress and egress easier while keeping the car as compact as possible.

The design department started to show proposals for the car in 2017. The first full-scale models were built in 2018 and from there the current styling direction was chosen and developed, Ferrari chief design officer Flavio Manzoni said.

Code-named F175, the new model was nicknamed Purosangue, or “thoroughbred” in Italian, because it was designed from scratch.

“The chassis, engine and gearbox were brand new and most of other components had been specifically designed for this model to make it a proper thoroughbred,” Fulgenzi said.

By mid-2018, Ferrari decided Purosangue was going to become the official name of the model, and then-CEO Louis Camilleri announced during the company’s capital market day in September that year that the car would go into production.

The Purosangue further develops the mechanical layout Ferrari introduced in 2011 with its first all-wheel-drive model, the FF four-seat coupe, which is now called the GTC4Lusso.

In addition to the active suspension system that Ferrari developed in-house in cooperation with Canadian supplier Multimatic, the Purosangue features four-wheel-steering to improve maneuverability and handling at high speeds.

The model has a top speed of more than 310 kph (193 mph) and accelerates from 0 to 100 kph in 3.3 seconds. Fuel consumption and emission figures will be announced when the homologation process is completed, the company said.

The Purosangue is 4973 mm long, 2028 mm wide, 1589 mm tall and sits on a 3018 mm wheelbase. Despite having the proportions of a tall hatchback rather than a rugged SUV, the Purosangue offers a surprising easy ingress and egress, and has ample legroom for all four passengers, each with an identical individual seat. Cargo capacity is 473 liters, the most for a Ferrari, and the rear seats fold to increase luggage space.

Ferrari says the Purosangue has no direct rivals. The Rolls-Royce Cullinan SUV has a V-12 engine, but it is oriented toward comfort rather than pure performance. The Aston Martin DBX V8 707 comes close in terms of performance but is powered by a turbo V-8 rather than a normally aspirated V-12. Models such as the Bentley Bentayga and the Lamborghini Urus come up about 200 hp short of the Purosangue’s output.

“Other SUVs have high performances, but do not drive like sports cars,” Fulgenzi said.

Ferrari took what might seem like a bold decision on the infotainment side: Realizing that an embedded navigation system could not match smartphone apps, it offers only full connectivity for Apple Car Play and Android Auto.

“While designing and discussing the navigation system, we came to the conclusion that, whatever navigation system we put in our car, it won’t ever be more updated than the most-used smartphones’ ones,” said Galliera, the marketing and commercial executive.

While Purosangue offers on-board Wi-Fi and emergency calling, connectivity is limited to the infotainment system, and there is no over-the-air-update capability.

Ferrari said it will offer over-the-air updates only when it will be able to deliver a cybersecurity level that is totally safe in all possible conditions.

“Right now in a Purosangue, a hacker could do no more than change your radio station,” Galliera said.