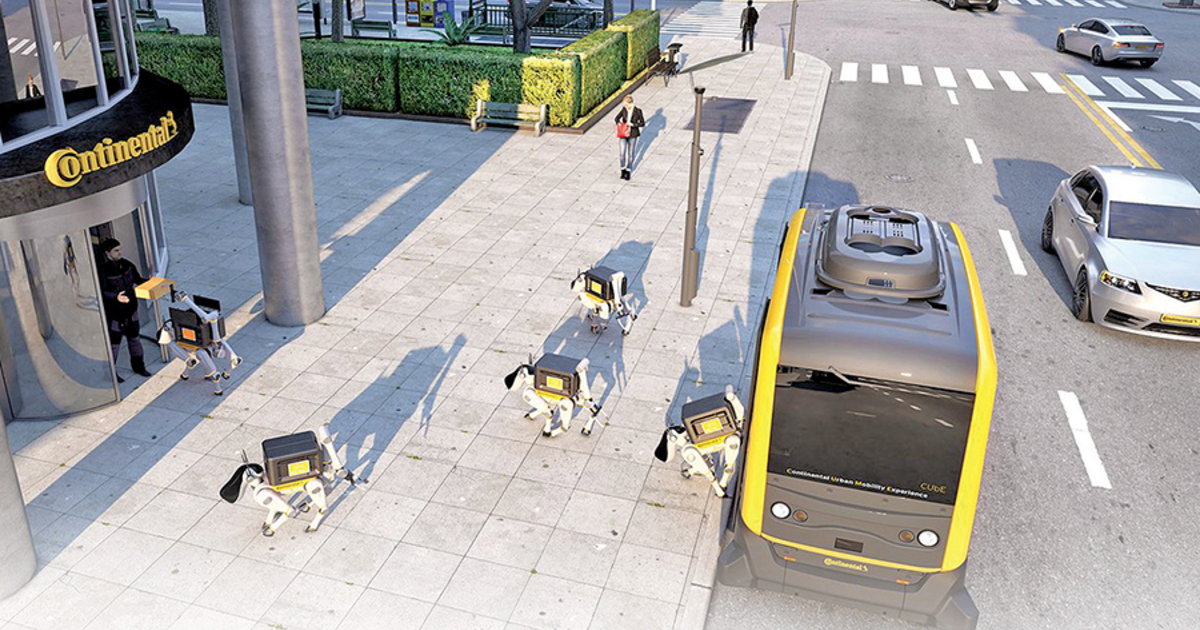 With robotaxis an always-on-the-horizon mirage — and costing billions of dollars to develop and deploy — automotive companies are seeking quicker paybacks for expensive autonomous technology.

Delivery robots, which use the same sensors, software and manufacturing infrastructure, have become a prime opportunity.

Magna’s announcement last week that it has started building a large fleet of cooler-like, six-wheel robots for autonomous delivery startup Cartken is one example.

Just as the industry has struggled to commercialize self-driving cars, delivery robots face significant hurdles. There are figurative obstacles such as regulation and resident opposition and literal ones like long crosswalks, broken sidewalks and stairs.

In 2019 Continental showed a dog-like, four-legged autonomous delivery robot designed for last-mile delivery, which stowed away in the company’s robotaxi. In 2020 Ford bought a pair of human-like robots from startup Agility Robotics. They have arms that can hold packages and legs that can climb steps to deliver packages.

Automakers hope to be involved in a market estimated by Verified Market Research to grow worldwide from $24 million in 2019 to $237 million in 2027.

Like robotaxis, delivery robots provoke awe and ire. They must integrate into a city’s unique transportation infrastructure, neighborhoods and culture. But they also face unique challenges.

Austin’s transportation department allowed the three-wheel robots to operate in bike lanes, monitoring to ensure they complied with state and local regulations. But residents and cyclists complained.

Austin transportation department’s Jacob Culberson told radio station KUT, “As long as they were complying with state law, we don’t feel there would be a need for that unless there was some safety violation.”

While robot delivery seems to work conceptually, it remains a technical challenge, according to a multi-city study released by the John S. and James L. Knight Foundation last week. It looked at how delivery robot company Kiwibot’s vehicles operated in pilot programs in Pittsburgh, Miami-Dade County, Detroit and San Jose.

The robots struggled to traverse uneven sidewalks overgrown with bushes in Pittsburgh. They lagged the time allotted by traffic signals when crossing large intersections in Detroit.

In San Jose, researchers observed 12 incidences of a robot getting stuck and hampering accessibility for sidewalk users.

“Some pedestrians exhibited hesitation around the robots because they were uncertain about how the robots would respond and/or move,” the study said.

Pilots varied in each city, but overall researchers sought to learn how the technology worked in the real world and how it could support local businesses. The project gauged public reaction to delivery robots and looked at how to involve residents in regulation of the technology.

“Curiosity was a common initial reaction from many of the community members that were engaged throughout the course of the pilot,” the study said. The study also found responses were “mixed,” with some voicing “a disinterest in seeing robots on city streets.”

At an initial community meeting in Pittsburgh, many expressed concerns about the deployment of robots as well as disapproval with the pilot, while others noted “they did not see the utility of the robots.”

Depending on the city, the pilots ran between June and December 2021, with up to 10 delivery robots operating in each location. The robots operated “semi-autonomously” and were primarily controlled by remote operators.

Nico Larco, director of the Urbanism Next Center at the University of Oregon, told Automotive News companies need to better engage with communities.

“The tech itself is only one part of the equation,” he said.

Deployment of delivery robots requires coordination between public and private sector partners and the involvement of residents, Larco added.

“If not, there is the possibility of infrastructure not being prepared to accept the tech and not addressing community needs,” he said.