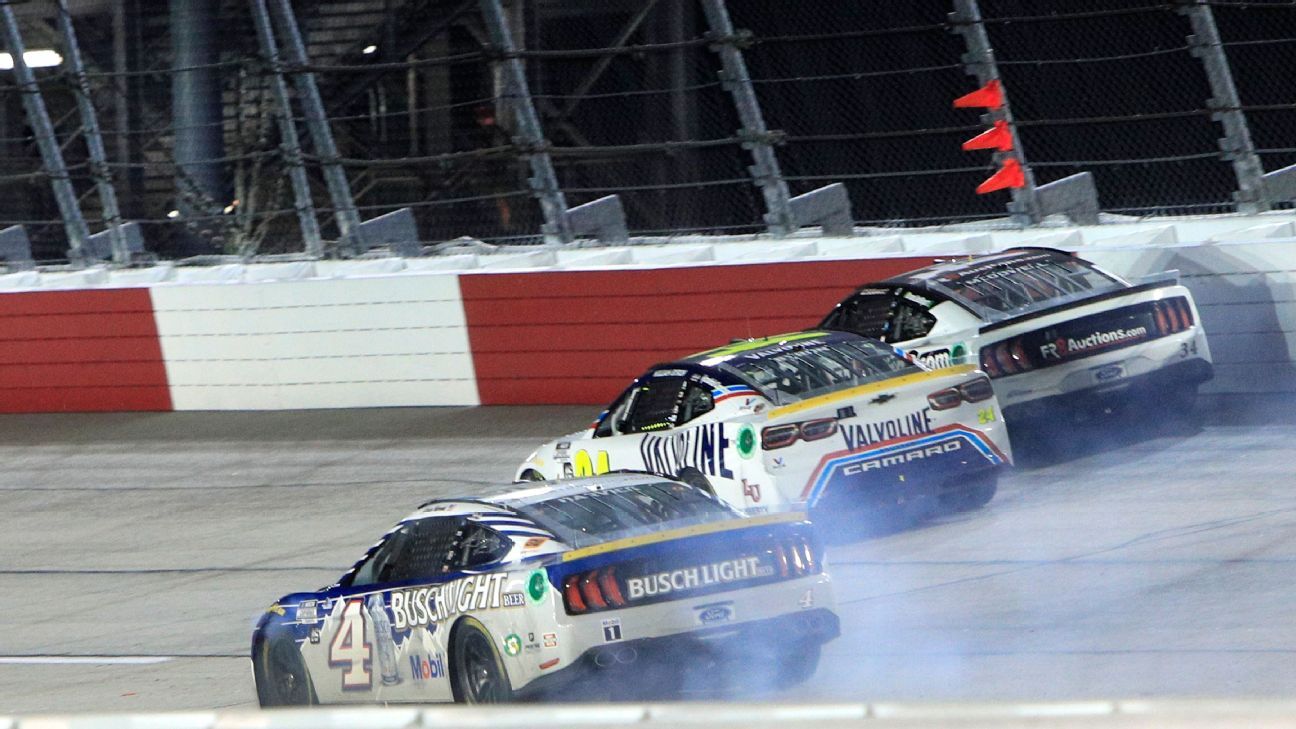 NASCAR is investigating a spate of car fires that left one championship contender fuming after his Ford erupted into an inferno during the opening playoff race.

Kevin Harvick lashed out at NASCAR and the new Next Gen car after his inexplicably caught fire at Darlington Raceway. The Next Gen debuted this season and is a spec vehicle with single-source parts that is intended to both level the playing field and cut costs.

The Next Gen has achieved some of its goals but has also raised safety concerns unrelated to the fires involving the force of impact drivers are taking in crashes. Kurt Busch has been out with a concussion since late July.

Now comes a fire issue that can’t be ignored any longer after Harvick’s car burned Sunday night on national television. Although the Chevrolet of Alex Bowman caught fire at Darlington in May, the fire issues have predominantly plagued Fords. Chris Buescher and Joey Logano both had car fires at the Indianapolis road course, and Chase Briscoe‘s car caught on fire at Richmond.

“I’m sure it’s just crappy parts on the race car like we’ve seen so many times. They haven’t fixed anything. It’s kind of like the safety stuff. We just let it keep going and keep going,” said Harvick, who finished 33rd because of the fire.

“The car started burning and as it burned the flames started coming through the dash. I ran a couple laps and then as the flame got bigger it started burning stuff up. The fire was coming through the dash. What a disaster for no reason. We didn’t touch the wall. We didn’t touch a car and here we are in the pits with a burned-up car and we can’t finish the race during the playoffs because of crappy-ass parts.”

Harvick added that he stopped where he did on the track — bringing out a caution that some have said took NASCAR too long to call — “because the flames were coming through the dash and I couldn’t make myself sit in there and burn up.”

The fire dropped Harvick, winner of two races this season, to last in the 16-driver playoff field headed into Sunday’s Cup Series race at Kansas Speedway. Four drivers will be eliminated from contention after next week’s race at Bristol Motor Speedway.

NASCAR, which already has been looking into the rigidness of the Next Gen based on driver feedback, has acknowledged “it’s unacceptable for the cars to catch on fire,” and senior vice president of competition Scott Miller said series officials are investigating.

In the meantime, NASCAR ordered teams to replace a part of the polymer panel used in the passenger side door area with stainless steel. The design is intended to keep debris from the drivers. NASCAR is also permitting changes to the coating material used on the cars, and mandated a lateral seal across the engine panel.

Miller rebuked Harvick’s notion that NASCAR has not addressed Next Gen issues.

“To say that NASCAR doesn’t care is about as far from the truth as you could get. I think he actually does know we do care,” Miller said on SiriusXM NASCAR Radio.

“We’ve been working on different solutions for different things along the way that seem to maybe be the trigger. Obviously, we still have work to do,” Miller added.

Miller also said that NASCAR is taking a close look at Ford’s exhaust clearances “because they seem to be having more trouble with this than the others.

One theory is that rubber buildup on the track is getting trapped inside the cars and then igniting, which is why NASCAR has mandated the splitter seal to “reduce the migration of tire debris to the splitter area.”