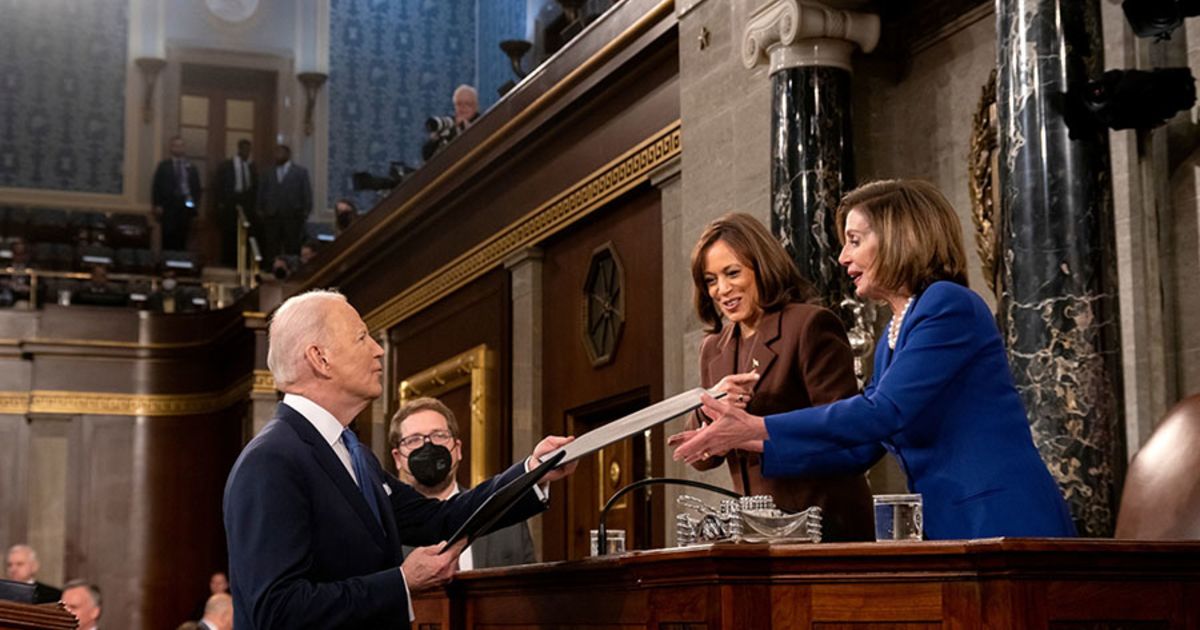 WASHINGTON — President Joe Biden, who last year unveiled major climate, energy and transportation plans and touted an electric vehicle future, shifted the focus to addressing a stack of crises during his first State of the Union address.

“We meet tonight in an America that has lived through two of the hardest years this nation has ever faced,” Biden said in a speech late Tuesday from the nation’s capital.

The State of the Union comes as Biden faces a pivotal moment of his presidency amid major headwinds ranging from Russia’s deadly invasion of Ukraine, soaring inflation and lingering effects of the COVID-19 pandemic.

The future of Biden’s Build Back Better agenda — the centerpiece of his economic and climate plans — also remains cloudy after facing opposition from Sen. Joe Manchin, a West Virginia Democrat.

Republicans, too, have fiercely opposed the reconciliation bill, which can pass in the Senate with 50 votes. The roughly $2 trillion package included a controversial EV tax credit with a bonus incentive for union-made EVs.

Still, the president used part of his speech to call on Congress to take action on clean-energy legislation, including investments and tax credits that he said can lower the price of EVs.

“Economists call it ‘increasing the productive capacity of our economy.’ I call it building a better America,” he said of the strategy to make more goods such as cars and semiconductors in the U.S. and to establish domestic supply chains.

The U.S. Energy Department, for example, is planning to construct a “first of its kind” $140 million demonstration facility to extract and separate rare earth elements and other critical minerals, according to a White House fact sheet released earlier this week.

The department this spring also will make available nearly $3 billion to increase domestic manufacturing of advanced batteries for EVs and energy storage.

“Republicans and Democrats came together on the bipartisan, counter-inflationary infrastructure law that will benefit our country and our economy for decades to come,” Sen. Rob Portman, R-Ohio, said in a statement following Biden’s remarks. “We should use this as a model for future cooperation. Instead, Democrats continue to push for reckless tax and spending hikes, which would make this inflation crisis worse.”

Last year, Biden set a target for half of all new passenger cars and light trucks sold in 2030 to be zero-emission vehicles, including battery electrics, plug-in hybrids or fuel cells.

Major automakers including the Detroit 3, Toyota Motor North America and Volkswagen Group of America announced their support of Biden’s goal of reaching a 50 percent ZEV sales share by the end of the decade.

The industry’s commitment, however, hinges on efforts by the administration and policymakers to put forth measures that foster greater consumer adoption of EVs, including purchase incentives, charging infrastructure, R&D investments and incentives to boost domestic EV manufacturing and supply chains.

“To compete for the jobs of the future, we also need to level the playing field with China and other competitors,” he said.

The U.S. House of Representatives and the Senate have passed separate competitiveness packages but have not yet introduced a compromise bill.

Both the House and the Senate bills include $52 billion in funding for semiconductor production and research — $2 billion of which would go toward incentivizing the production of chips used by automakers and their suppliers.